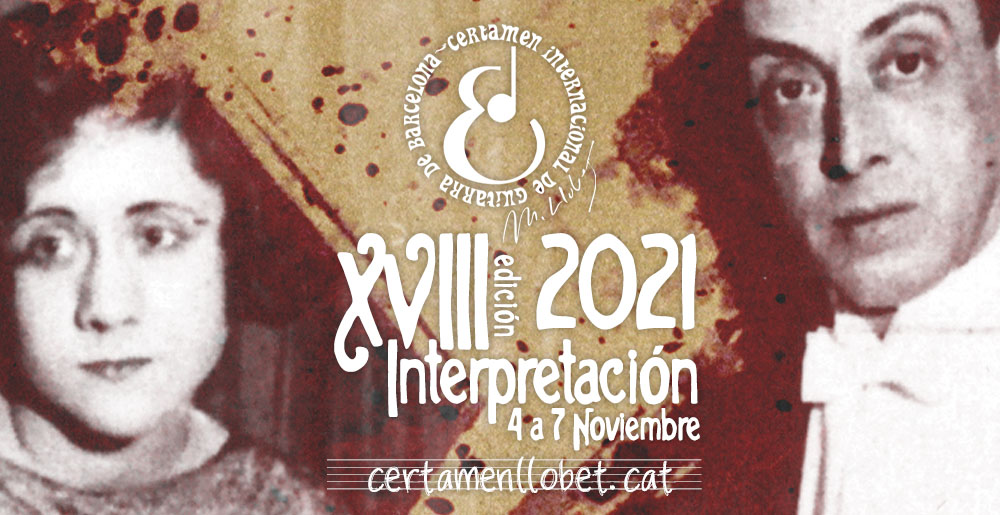 The first edition of the Llobet Contest was held between January 24 and 27, 1995 in the same place where it is currently held, in the Toldrà Auditorium of the Municipal Conservatory of Music of Barcelona. However then, it was not in homage to the teacher Miquel Llobet, nor was the audience the same.

In that year the tribute was addressed to the illustrious Lady of the Guitar, Maria Luisa Anido, who at the end of the contest, in a gesture of sincere humility, requested that he change the name of the event to that of her beloved teacher, the illustrious Miquel Llobet.

The auditorium that bears the name of the great musician Eduard Toldrà, was not the same either, its walnut wood walls aged by time, had a sweet sound throughout the room. Today the wood of a clear oak according to our time promises to give the listener new sound experiences.

In 2021 we are coming of age with the eighteenth edition and with the renewal of a new era of guitar talent, we have prepared for its exhibition a repertoire full of sonic colors.

The first qualifying phase will have two of the most important figures of the 20th century and two works linked to their authors, Respuesta by Miquel Llobet, dedicated to his favorite student; and Boceto indígena, the work of Maria Luisa Anido, who is celebrating the 25th anniversary of her disappearance.

The second semifinal phase, the classifieds will interpret the Argentine maestro Astor Piazzolla with the work Acentuado of the 5 pieces for guitar, celebrating the centenary of his birth; and at the end of this stage the work awarded with the first prize in the first edition of the 2020 Llobet Composition Contest, Canció primera by Diego Corraliza, from Alicante who honors the poetics of Miguel Hernández.

In the final phase, the three finalists will perform with a string quartet choosing between two works praised and awarded by critics and musical experts, we refer to the Quintet No. 1 of the young Slovenian composer and guitarist Nejc Kuhar and the famous work Usher-Waltz Fantasia by the Russian master Nikita Koshkin.

We hope that the participants enjoy this repertoire of great musical richness and that they transmit the sounds necessary to move the soul of the audience.